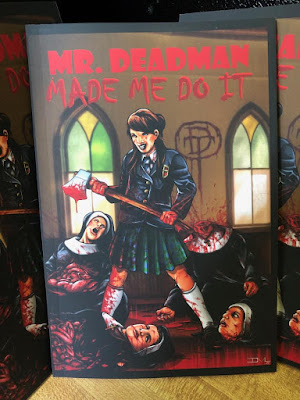 So, what's been happening in my life?

Life can be vicious at times. In addition to all my other responsibilities, I've been helping my eighty-five-year-old father fight against telemarketers and scam artists who seem to devote themselves to bilking the life savings of the elderly. I consider every one of them to be lower than the scum of the earth, less beneficial than whale shit at the bottom of the ocean, and totally worthless as human beings. If I had my way, I'd transform each and every one of them into characters in one of my novels and find even more gruesome techniques to kill them in slower and more pain-filled ways than I've already written about.

If you're a telemarketer guilty of bilking the elderly, and I've offended you,
"Good!"
Go consume defecation
(which is a nice way of saying something else with the same meaning).

Anyway, I've been busy as hell. I just completed the first draft and am almost finished with the rewrite of a novella I expanded from a short story. I always loved the short, but I am infatuated with the novella version. It's a Western/Horror story about a wagon train and what they run into during their journey to the promised land of California. It, in my mind, is one of the best things I've ever written and can't wait to get it available. The story goes to the editor this weekend and will be out in plenty of time for my appearance at Scarefest 2019, which is September 15-17 (I think, lol). I'll also make it available on Amazon for those of you too wimpy to drive to the show.

I also just had a short story released in the writers' anthology, "Mr. Deadman Made Me Do It." I took the idea for the story from an actual Kentucky legend about a young girl's ghost that tried to escape her grave with so much intensity, the bars on a metal picket fence were bent outward from the grave. You can purchase the book of shorts, which has several other great stories by fantastic authors in it at Amazon.

"Deranged Minds" is still doing well, although the reviews have been exceptionally slow in coming in. I think there are some who fear having their name associated with something so dark ... you know, politicians, I.R.S. employees, and Catholic priests and such. If you've read the book, please don't hesitate to write a review on Amazon. The book could sure use some.

I'm also waiting on two more anthologies to be published as I'll have stories in both, and I'm in the middle of writing two different novels. I won't disclose the plot lines as of yet, but let us say the Medical Industry may not be pleased at the revelations discussed in one about the common advertising phrase they use ... "Preventive Oriented Testing" actually meaning "Profit Oriented Temptations."

As mentioned, I will be at Scarefest this year, along with two other authors in the same booth. James Watts and Chris Miller will be joining me in selling our wares and autographing all purchased. Film Stars, Bruce Campbell and Linda Blair will be making a personal appearance there, as well as many others with whom you're familiar. Check it out at the link below.

Yeah, this link ... you know, Scarefest.

And, coming this fall, I'll be making a special guest appearance for two nights (October 17th and 24th from 6-10 pm) at a haunted barge called The Haunted Majestic! (Yeah, they're paying me to be there ... can you believe it?) If you can't make it to Scarefest, don't miss me at the barge. It should be a fantastic time!


So, with my busy season of the year coming up, I may not post as often (that's a joke, you know my inconsistency in doing so already), but when I do, there will be something you'll want to read.

Posted by Richard Rumple at 3:35 PM