As if dealing with a shoulder/arm injury wasn't enough to hinder my physical ability to write, I am now having to deal with a family tragedy that will delay any writing time until much later in the future.
On July 17th, I hit the road to take a 250 journey to my father's home in Indiana. I hadn't been able to get up with him since the previous Saturday and was concerned that either AT&T wasn't ringing the phones in the house (a previous problem with them) or something else was going on. After arriving, I was unable to get any response to my knocking or phone calls once again, so I used my key to enter the home through the garage and into the kitchen.
The house was silent, uncommon for 1pm as he'd usually be watching television. I noticed a mass of dead flour beetles on the counter ... another uncommon occurrence even though he had battled with them for several months. Normally, they would be cleaned up. I searched the upstairs before heading into the basement where he had taken up residency since the death of his wife (my stepmother) in 2016. It was ominously quiet and dark.
I first checked to see if he was in the bathroom. Having suffered the last few months with prostrate problems, I figured this would be where he was at. No, I was wrong. It was empty. Finally, I headed back toward his bedroom thinking he might be taking a nap. It was there I found him ... dead.
There is no shock like finding the dead body of a parent.
As my father didn't believe in air conditioning, the heat had obviously been a factor in his body decomposing much faster than normal. In fact, he didn't even look like himself at all. I won't go into any further detail out of respect for him, but I will say it's a sight I'll never forget.
I immediately called 911. The call went something like this:
"Yes, my name is Richard Rumple. I just drove up from Lexington, Ky to check on my father and found him dead. I don't know who you need to contact, but please do so."
"Are you sure he's dead?"
"Ma'am, there is no doubt."
"Why don't you go and check to see if he has a pulse?"
"Ma'am, there is no doubt he's dead. He has started decomposing."
"Well, it wouldn't hurt for you to check and see if he has a pulse."
"Ma'am, there is no damn way I'm checking. He is dead. Take my word for it."
"Alright, if you're sure ... I'll contact the sheriff's office and ambulance service. What's the address there?"
Why is it so hard for someone to believe that we're not all dumbasses? I wouldn't have called her if I hadn't been sure ... at least not to report his demise.
Anyway, first the deputy arrived and I had to go all over the discovery details with him, and then did the same with the County Coroner. Finally, they'd taken him away and I was alone in the house.
I look back at my thoughts at that time. He was eighty-six years old and had been suffering. He'd just been told he'd have to wear a catheter for the rest of his life, was beginning to show signs of dementia and Alzheimer's Disease, and we'd discussed the possibility of him entering a nursing home. He'd told me several times he was lonely and ready to give up. I thought I'd talked him out of that direction. I guess I was wrong.
We buried him the following Wednesday.
I am now dealing with what he left behind. If you follow me on Facebook, you've seen the pictures. Yes, he was a hoarder. I am in at least a six-month process of cleaning up all he left stacked and piled behind. This last week was spent checking the expiration dates of canned goods and such, finding all but thirteen cans or bottles had become outdated. Over sixty trash bags await a dumpster that will arrive soon. That is only from the kitchen and it's not even completed yet. I have a long way to go.
My wife and I plan to move into the house after I finish the clean-up and necessary remodeling. This could take up to a year depending on the speed of myself and contractors. Obviously, they cannot start before I clean the place out of the mess that would only hinder their efforts. Thus, writing will just have to take a backseat for the time being.
I hate this, more than you know, but life must go on. I do still plan on making my appearances at Scarefest 2020 and the Haunted Majestic in October (if they go as currently planned with pandemic concerns rising), but I'm afraid I won't have any new offerings at either show. My apologies. I hope you understand.
It may also be a while before I post again. The clean-up is taking most of my time and I'm sure you're not interested in a play-by-play account of its progress.
So, until next time, "Ciao!"
Posted by Richard Rumple at 8:08 AM No comments: 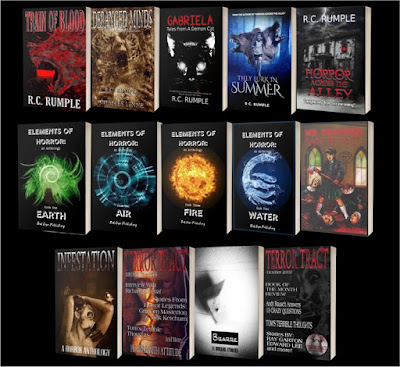