The Empties ... A New Comic Book For Today's Horror Fans

How long has it been since you've sat down with a good comic book?

As a child of the 60's (which obviously makes me an old fart), comic books were a daily part of my life. The Internet was obviously nothing more than science fiction at that time, as were cell phones, watches that measured our daily activity, and flying drones.

The first comic book I can remember having was the original issue of the Fantastic Four. (What I wouldn't give to have a mint copy today.) My mother and I had just come from the doctor's office where I hadn't cried during the injection of a Polio shot. I was rewarded with a nickel Coke, a candy bar, and the Fantastic Four. That visit to the drug store started three habits that would continue for the rest of my life.

The types of comics I enjoyed knew no genre. I loved them all. Batman, Superman, Green Arrow, The Martian Manhunter, The Flash, Wonder Woman, Tom & Jerry, Archie, Donald Duck, Micky Mouse, Wally Gator, Tennessee Tuxedo, Magilla Gorilla, X-Men, Spiderman, and so many others that if I named them all, you'd grow tired reading. My favorites included the screen adaptations of movies. Treasure Island, Old Yeller, Lobo, Mysterious Island, and more assisted my imagination in understanding how to see what the words were saying. It's a task of every writer that types the first word. I'd be remiss in saying comics didn't help me in achieving this skill.

Through my days in the military, many of us escaped the mundane routines of daily life by sharing our collections. Not only were we taken to worlds outside of the realities we faced but found our sanity demanded this relief. Later, married life brought a sharing of these books with my children. Yet, I found with cable television hitting the marketplace, they found other avenues of entertainment. Still, I'd pick a few up while shopping for my own enjoyment.  The early 90's brought forth a revival. By accident, I discovered that comics had come a long way. No longer were they just minor stories to entertain, but illustrated novels of sorts. Grim Jack, Watchmen, and even The Vampire Lestat series (which I still have, unopened in each of the issues original plastic wrappings) were aimed at the adult reader instead of children. Batman had been revived to be a much darker character and Superman had lost half of his powers. There was even a new character for Hispanic's called El Diablo that had a limited edition series. (I have all of those, too.)

Comics remind me of the old adage, "A picture is worth a thousand words." A writer understands what that means more than anyone else. Hours are spent in an attempt to find just the right combination that will keep the reader interested. Thus, the pictures of comics do their jobs well, presenting an image to spur the imagination into action. 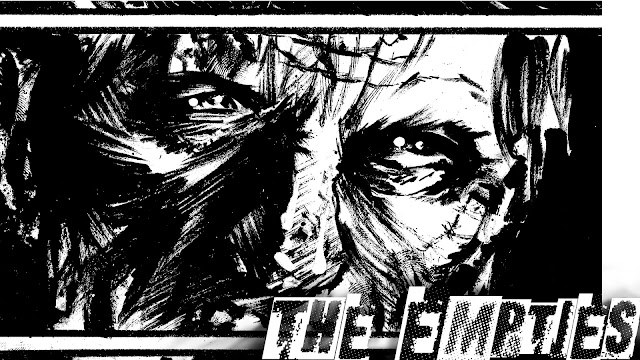 This brings us to The Empties. I was recently approached to review this new addition to the many lines of comics in the marketplace, today. Perhaps, being a writer of Horror had something to do with it. I'd rather believe it was fate calling me.

There are things I appreciate about this new offering and some that I don't. Being a comic book, the artwork is the first factor to consider. In The Empties, the drawings are indicative of what one finds in graphic novels of today. Yet, these black & white images are created with an edge, one that creeps into your soul and refuses to leave. Precise to a degree, yet, vague enough to allow your imagination to fill the gaps it supplies. Impressive.

The Empties storyline is basically another tale of zombies, or is it? As I have only seen an advance copy of the first issue, I'm not sure. Much of this book is spent developing the primary characters, Derrick and Helen, and their current domestic situation in life. Still, the book opens with a well-presented offering of what may come later in the area of horrific occurrences.

I have to step back and be completely honest, my writing consists of developing characters to the nth degree, verbose if you will. I'm working to reduce this to allow the reader's mind and imagination room to thrive. Yet, I still find much of this necessary to present an accurate depiction of the character and in getting the reader to love or hate them. The Empties reminds me of this same effort. However, there is an early restaurant scene that tends to get old quick, and could easily have been condensed without harming the storyline. Too much needless chatter and panel usage before the primary purpose of the scene is revealed. Yet, the book moves on nicely after that.

As in the cliffhangers of old, The Empties first issue ends abruptly, but not atop the mountain staring at a deep chasm as most. My interest as to what happens next is there, but the "Oh, my God, how could they stop here" feeling sought is not present. I'm not sure if this was done because the storyline is still developing, or because the story concerns itself with human domestic concerns in many more panels than the horror of zombies. The next issue will tell the tale.

The Empties is interesting and has tremendous potential. It will be interesting to see how the story progresses in issue number two. Obviously, the story will revolve around the "Derrick" character, but the others shown are all in question. Other answers to how the zombies came about, how many people will survive, what new characters lie ahead, and who cleans the food off the wall will hopefully be supplied in future issues. The Empties has planted its seed in my curiosity. I'm anxious to see how it grows.

Look for it in the near future in comic book stores throughout the nation. As soon as it becomes available, I will amend this review to let you know, as well as post links where you can order it. I'll be waiting for your comments after reading it. I don't think you'll be disappointed.


Here's a link where you can purchase The Empties !

Posted by Richard Rumple at 7:55 AM